Stones In My Pathway 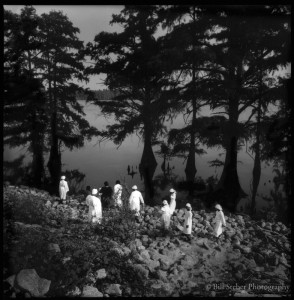 Baptism II
Moon Lake, MS 1997.
A group of baptism candidates make their way carefully over loose stones to the edge of Moon Lake, an oxbow of the Mississippi near Lula, MS. Small churches in the Lula/Friars Point area gather in the fall to baptize candidates in the lake just as they have for over one hundred years. The great migration of blacks from the Delta in the 1940’s and 50’s resulted in a dramatic decline in the Delta population, impacting church congregations to the point that many churches were abandoned. Today’s Delta churches now pool their resources to help keep tradition alive. Baptisms are usually attended by members of 3-6 different congregations. 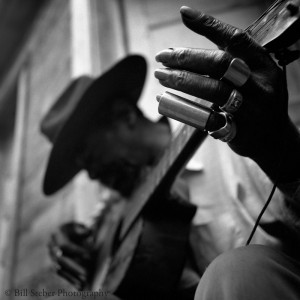 Until his death in 1997, guitarist/harmonica player/folk artist David Johnson played Delta-style slide guitar at his home in Elba, AL on an old Stella guitar. Slide guitar technique is thought to have developed from a rudimentary single string African instrument played by sliding a bone or rock the length of the string. In the American South, a similar child’s toy called a “diddley bow” often served as the first musical instrument for aspiring young blues players in the Delta. Mississippi blues artists used the slide as a way to mimic the human voice and have their instrument “talk” back to them in a call-and-response style often associated with the black church. It’s use spread throughout the country with players using everything from broken bottle necks to knives to produce the distinctive, ethereal sound of genuine Delta blues. 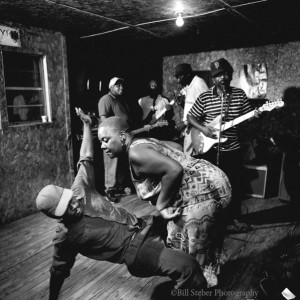 Willie King at Betty’s Place
Prairie Point, MS 2000
Willie King is a rarity in the Mississippi blues tradition. Born in 1943 in Prairie Point, MS, and raised by grandparents, King struggled to survive in variety of jobs from plowing mules, working in sawmills and working as a traveling salesman. But what makes King’s story different from so many others, is that he took his experience and not only expressed it through his art, but also through social activism, forming the Rural Members Association to aid poor rural blacks along the Mississippi and Alabama border and making himself “a field hand turned Field Marshall” in the process. Alongside his band, The Liberators, King sings “struggling songs”, expressing the harsh realities of life that many blacks endure while at the same time creating exciting, groove-laced traditional blues that are neither preachy nor overly didactic. “The blues have always been part of me,” says King on his 2002 release, Living in a New World. “I live it every day. And it’s about love ‘n sharing, helping each other, caring for one another, thats what the blues life is all about. I’m holding on to the blues life, because I found out that it’s a good life to live. I just want to keep passing it down.”
PHOTO © BILL STEBER. NOT FOR REPRODUCTION OR RE-USE FOR ANY PURPOSE WITHOUT PERMISSION FROM THE PHOTOGRAPHER 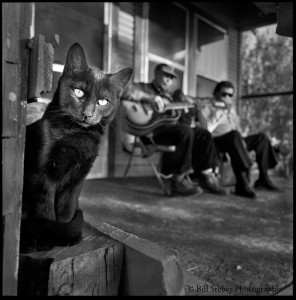 61 Highway is the longest road I know
Goes all the way from Chicago to the
Gulf of Mexico
Son Thomas, Highway 61 Blues

Driving along Highway 61 on a muggy summer day, the road ahead disappears into wavering bands of heat, telephone poles become rows of crosses, and overhead power lines buzz like late summer cicadas. The highway rises out of Louisiana swamps entering southernmost Mississippi to trace the Civil War through Natchez, Port Gibson, and Vicksburg, before cutting through the heart of the Delta like a long thin incision into Memphis, and weaving toward its final destination somewhere in Illinois.

In August of 1992, I drove on Highway 61 for the first time past Delta towns like Lake Cormorant, Bobo, Alligator, Mound Bayou, Panther Burn, Nitta Yuma, and Rolling Fork. I stopped in the little town of Leland in search of bluesman and folk artist, Son Thomas. His son, Pat, met me at the door of their weathered shotgun shack and invited me in. To my left, a homemade casket held the carved likeness of a dead woman in a blue print dress. On a shelf to my right sat a grinning clay skull with two rows of human teeth and aluminum foil eye sockets. I found Son seated on the side of his bed hunched over and holding aloft a cigarette with an arching three-inch ash.

Son Thomas spent most of his life as a day laborer, gravedigger, and part-time blues musician, while entertaining at local parties around Washington County. Despite international recognition late in life as one of the South’s most important blues and folk artists, he still struggled to make a decent living with his art. The afternoon I spent with him talking about his life and hearing his music made an indelible impression on me. I vowed to come back as soon as I could. When I returned the following Spring, Son was lying in a hospital bed dying of a brain tumor.

Since that first visit, I’ve witnessed many changes in the Delta. Not only has the blues world lost many important artists like Son, but the arrival of casinos has brought with them a flood of fast food, chain stores, and competition to the rural juke joints that help keep the Blues alive in Mississippi. The plantation where Robert Johnson first learned music is now home to three casinos, and billboards now pockmark Highway 61 where once there was an unobstructed view of vast fertile cotton fields.

These changes are significant because the history of the Blues parallels the history of Black Americans in the twentieth century. To many of the three million African-Americans who migrated from the South in the first half of this century, Mississippi is the ancestral homeland, the American “Egypt” from which they escaped social and economic bondage. The same Mississippi soil that transformed the Delta into the land of king cotton with the sweat and suffering of slaves and sharecroppers also produced a cultural legacy of music, religion, and rural traditions that shaped and defined the African-American community. The Blues, one of our country’s oldest original forms of music, was born of field hollers, railroad chants, black spirituals, jump-ups, European folk music and the ability of the human spirit to dignify itself in the face of oppression.

These photographs are my attempt to document the living legacy of this rich cultural tradition. The Blues is our country’s most important musical art form for it has shaped every musical form developed in its wake, including gospel, jazz, rock and roll, bluegrass and modern country. Its echoes still resound in the sweaty juke joints and dusty cotton fields along Highway 61.